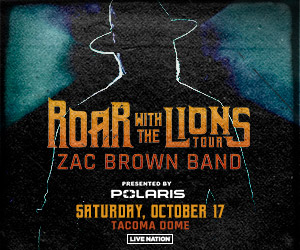 The Zac Brown Band just announced their “Roar with the Lions” Tour and you could win tickets before they go on Sale with FREE TICKET FRIDAY!!

The Zack Brown Band returns to the Pacific Northwest Live at the Tacoma Dome on Saturday October 17th!

Tickets go on sale to the general public on January 17th 2020 at 10 am you can purchase your’s by clicking HERE!

On Sale Friday, January 17 at 10:00 a.m.
Seattle, WA (January 9, 2020) – Today, multi-platinum, Grammy Award-winning Zac Brown Band announced new
Summer 2020 Tour, “Roar with the Lions Tour” presented by Polaris.
The “Roar with the Lions Tour” will feature music from the band’s entire discography mixed with a dynamic selection of
genre-crossing cover songs that are a signature mark of each Zac Brown Band show. The tour is grounded in the historic
characterization of the lion, depicted as a symbol of strength, courage, and loyalty. Always counted upon to bring
sunshine and warmth into the lives of others, lions are fearless, treating one another with dignity and respect, bravely
walking through the forests they rule. At each show, fans can expect fiery performances and a rollicking good time.
“Our summer tour is inspired by the folklore surrounding the figure of the lion. I am a Leo, and all of the guys in the band
are lions,” said Zac Brown. “They exemplify strength, courage, intelligence, and loyalty, and work in tandem to defend
their territory and one another. The crowd is our pride – rooted in togetherness and fiercely loyal. They always show up
for each other, no matter what, just like our fans always show up for us. We can’t wait to hear you roar with us!”
Zac Brown Band is one of the most successful and consistent touring acts of the last decade and regularly claim a top
spot in Pollstar’s Live75 charts. The Boston Globe praised the band’s live show saying, “[Zac Brown Band’s] blend of
chops, spirit, and knowing exactly how to please a crowd has made them one of the summer concert season’s most
reliable draws, always ready for a good time but also keenly aware of how to keep an audience on its toes.” Zac Brown
Band currently holds the record for most consecutive sold-out shows at the historic Fenway Park and was recently
named by The Boot one of the “10 Best Country and Americana Live Acts of the 2010’s.”
The Summer 2020 “Roar with the Lions Tour” will come directly on the heels of the upcoming spring 2020 leg of “The
Owl Tour,” featuring 18 stops across the United States and Canada.
Tickets will go on sale to general public beginning Friday, January 17 at 10am local time at ZacBrownBand.com. The
Zamily Fan Club pre-sale will begin on Tuesday, January 14 at 12pm local time. Citi is the official presale credit card of
the Zac Brown Band Summer 2020 “Roar with the Lions Tour.” As such, Citi cardmembers will have access to purchase
presale tickets beginning Wednesday, January 15 at 10am local time until Thursday, January 16 at 10pm local time
through CitiEntertainment SM. For complete presale details, visit www.citientertainment.com.
All dates, cities, and venues are subject to change. For tickets or more information, please visit ZacBrownBand.com.

Tickets go on sale Friday, January 17 at 10:00 a.m. at LiveNation.com. All tickets subject to applicable service charges
and fees. Dates and times subject to change without notice.